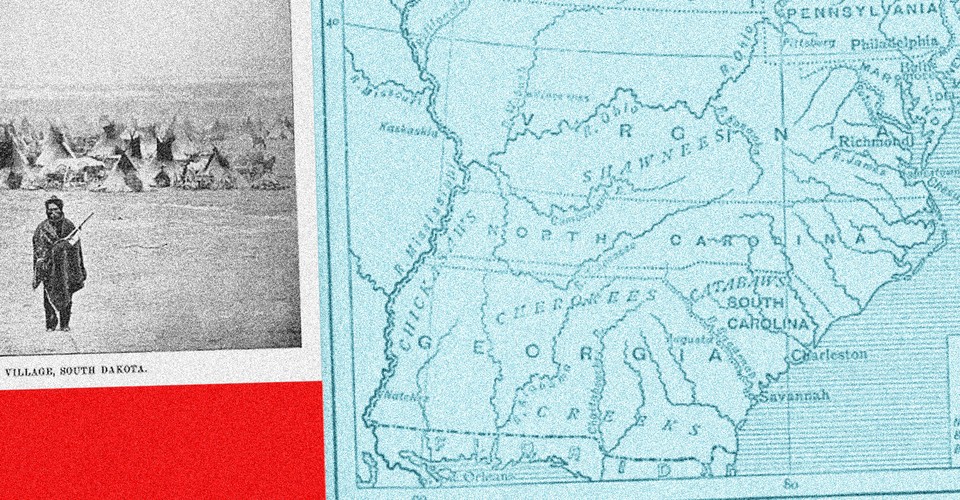 In David Mamet’s film State and principal, a big Hollywood hat tries to short-circuit a helping hand by offering him a credit “associate producer” on a film. A screenwriter overhears the exchange and asks: “What is an ‘associate producer credit’? The big boss replies, “That’s what you give your secretary instead of a raise.” “

The practice of “land recognition” – preceding a fanciful event by naming the indigenous groups whose massacre and dispossession have cleared the land on which the public sofas are about to be served – is one of the most great credits from associate producer of all time. An acknowledgment of land is what you give when you do not intend to give land. It’s like a receipt from a highway robber, noting all the jewelry and gold coins he has stolen. Maybe this will be useful for an insurance claim? You don’t get your jewelry back anyway, but now you have the documentation.

Long common in Canada and Australia, land recognition is gaining ground in the United States and is already required in certain circles. If you’ve seen enough – I’ve watched dozens of them now, sometimes more than one at a single event – you learn to spot them even before the speaker begins to recognize. In many cases, the tone becomes solemn and moralizing, and the posture of the speaker is stiff, as if about to read a confession at gunpoint. One could declare before, say, a retirement from corporate sales: We respectfully acknowledge that the ground on which we meet to discuss the new line of sprinkler systems is in Mi’kma’ki, the ancestral and unceded territory of the Mi’kmaq. Acknowledgment is almost always a prepared statement, read verbatim, because like all spells, it must be spoken precisely for its magic to work. The magic in this case is self-absolution: recognition relieves the speaker and audience of the responsibility of thinking about Indigenous peoples, at least until the next public event.

Extract from the May 2021 issue: Returning national parks to tribes

Thanksgiving is based on a cartoon version of the Americas Settlement, focusing on a moment of harmony between the victim and genocidal. Land recognitions are also designed to fondle the feelings of a predominantly non-Indigenous audience, this time allowing their smoothing self-criticism.

Earlier this month, Microsoft’s annual Ignite conference began with a grounded recognition so baffling to viewers that it briefly went viral. But it was not abnormal among statements like this. The master of ceremonies acknowledged that the company’s head office, a square mile of land outside of Seattle, was “occupied by the Sammamish, Duwamish, Snoqualmie, Suquamish, Muckleshoot, Snohomish, Tulalip and others. Coast Salish… from time immemorial ”. She noted that the tribes are “still here” but offered no connection between the past and today. Few bewildered spectators would deny the historic presence of these peoples in the midst of the sacred groves that then produced PowerPoint and Clippy, the mascot of Microsoft Word. But in the absence of context, the effect of this parade of names was to suggest that for thousands of years, Indigenous people had crammed onto Microsoft’s campus uncomfortably like canned salmon, doing who knows what, until ‘to what Bill Gates arrives at the end of the 20th century. to turn them into programmers.

Perhaps it is a victory for Indigeneity that the name Muckleshoot is even mentioned at a Microsoft conference. By far the most common defense of land reconnaissance is that it does no harm to anyone and that it educates Americans about a hidden story that has taken place literally where they are. Don’t they at least do that?

No, not even a little. It is difficult to overstate the superficiality of these statements. What do members of the recognized group hold sacred? What makes them unique and identifies them with each other? Who are they, where do they come from and where are they going? The escape from these fundamental questions is typical. The speaker does not demonstrate any knowledge of the people whose names he carefully reads on the sheet of paper. It also does not establish the most general connection between the event and these people, other than an elder, not too different from the speaker’s relationship with the local geology or flora.

At ceremonies and events in my hometown of New Haven, Connecticut, I heard that we were in “Quinnipiac Land”. This statement is never accompanied by a mention of the fundamental fact that the Quinnipiacs virtually ceased to exist as a people over 150 years ago, and that there are currently no recognized Quinnipiac tribes. I suspect that few in the audience know this, and that few speakers know it. (There is an “Algonquian Confederacy of the Quinnipiac Tribal Council.” Its leader, Iron Thunderhorse, is currently in prison in Texas for rape and is expected to be released in 2051, at the age of 107. He is half Italian, was born William Coppola, and according to a Texas Prison Authority legal record, was not listed as Native American on at least one of his purported birth certificates.)

Some people claim that land recognition is a “gesture of respect”. I am not sure that we can show respect while being indifferent to the existence of a people. Statements are a counterfeit of respect. Vogue teens Let’s say it well, even if it’s unintentionally: “Recognizing the land is an easy way to show honor and respect to indigenous peoples”. A lot of identity politics nonsense could be avoided by studying this line and realizing that the respect shown as the “easy way” is as cheap as it sounds. True respect only happens when it’s accompanied by time, work, or something else of value. Learning basic facts about a particular tribe could be a start.

Most of these recognitions are considered (by the speakers, at least) as moral acts, because they testify to crimes perpetrated against indigenous peoples and call, most often implicitly, for reparation. If you enjoy moral exhibitionism, not to mention moral onanism, Earth Reconnaissance in its current form will keep you happy for years to come. (The history of cartoons serves this purpose well; reality, less. Do you recognize the Quinnipiac, or the tribes they sometimes allied with the English to fight? Or both?) indigenous communities – or a sophisticated moral calculation. There is also no “easy way” to take this past into account. By the early 1600s, up to 90 percent of Quinnipiacs, along with other coastal Native Americans, were wiped out by chickenpox and other diseases imported by Europeans. How do you lay the blame for the spread of disease, hundreds of years before anyone knew that disease was anything other than the wrath of God? (Does China owe Europe reparations for the Black Death, which came, like COVID-19, from Hubei? Or should China take two opium wars and call it the same?)

Without time, without work, or effective repair, land recognition which implies a moral debt is equivalent to the receipt of the highwayman. “Recognizing native homelands and restoring those lands are linked, but the former alone allows rhetoric without further action,” Dustin Tahmahkera, professor of Native American cultural studies at the University of Oklahoma told me. If Microsoft really felt bad about the location of its offices, it might move its operations to less blood-soaked ground. (There aren’t many such places, alas.) Not all Microsoft conferences have to be the announcement of a real estate deal. But if Microsoft is to recognize a debt, it should also pay it.

Read: How to recognize a shameful past

If the practice of land recognition persists, it should do so in a less embarrassing version for all. I would suggest restricting these recognitions to forms and occasions that preserve their dignity and power.

Follow these rules and object to all land recognition that violates them:

These land recognition reforms would leave a lot of cynicism in mind – almost all justified, I think. Land recognition is a classic culture war issue, Nick Estes, professor of American studies at the University of New Mexico, told me by email. They can be “a pantomime of compassion or outrage mainly on the part of professional class elites and educational institutions”. Meanwhile, he asked, what are “the real issues facing indigenous peoples: housing, employment, child removal, generational poverty, lack of adequate health care, police violence, racism and erasure; in other words, real colonialism ”?

Acknowledgments are just words, and words can distract from real issues, especially the ultimate one, which is Native American tribal sovereignty. But some words are honest, even loving, and others are hollow and smelly. As an American and as a long and future member of an audience at ceremonies and events, I would be grateful for more firsts and fewer seconds.