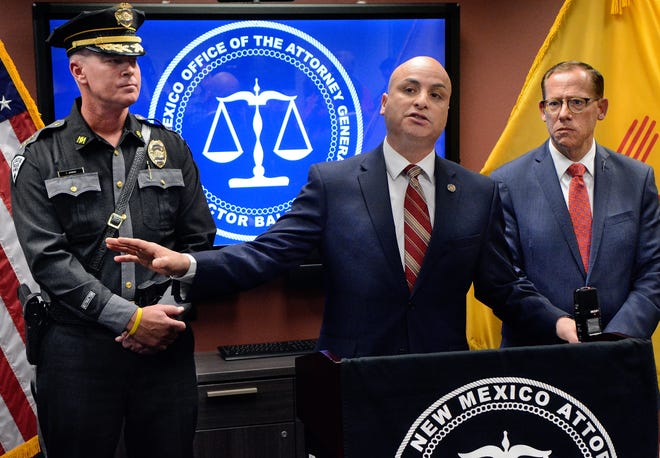 Over the past two months, several of the nation’s top law firms have poured money into the campaign coffers of Brian Colón, New Mexico state auditor and leading Democratic contender for attorney general.

Since 2018, when he was elected state auditor, Colón has received more than $165,000 from out-of-state litigation firms. Of those donations, $124,000 came from just seven companies — or employees and family members affiliated with those companies.

The donations reflect a now common practice: large law firms, usually from out of state, make large donations to campaigns for attorneys general. In New Mexico, many of these same companies were then offered lucrative contracts to represent the state in litigation and class action lawsuits.

“It happens a lot in different states,” said James Copland, director of legal policy at the Manhattan Institute, a conservative think tank that published several reports on States’ use of outside litigators. “And that, at least, creates a colorful impression of a paying type of arrangement.”

The practice dates back to the 1990s when many states, including New Mexico, were involved in class action lawsuits against tobacco companies. Since then, states have relied heavily on outside companies to sue companies for a number of public wrongs, like the opiate crisis and climate change.

In an emailed statement, Colón defended the state’s litigation model and said he plans to continue the practice of using outside law firms for consumer protection cases, while defending his gifts from these cabinets.

“The procurement process requires full disclosure of all donations, and I have always supported a transparent and open process,” he said. “If a conflict of interest arises, it will be handled in accordance with the ethical standards associated with my license to practice law in the State of New Mexico.”

More from Searchlight:Violence, vandalism and emotions rise after months of online learning for New Mexico students

Current attorney general Hector Balderas and other former AGs have championed the practice as a cost-effective way for the state to crack down on big business that has harmed citizens. Outside law firms that work in emergencies typically absorb the substantial upfront costs of suing large entities and only get paid if they get a settlement. Balderas argued that using these companies allows the state to bring lawsuits on behalf of New Mexican consumers that his office would otherwise lack resources for.

In an email response for an interview, Balderas cited the 2010 U.S. Supreme Court decision on Citizens United, which gave significant power to multinational corporations. “Yet,” he wrote, “we have built a nationally recognized fraud recovery unit that has successfully prosecuted the world’s largest and most powerful corporations that violate unfair practices law and recovered hundreds of millions of dollars for New Mexico.”

Over the past several decades, New Mexico has prosecuted many such cases, and often the outside companies hired for these cases have made large donations to the campaigns of the AGs who hired them.

Balderas’ two predecessors – Gary King and Patricia Madrid – were also known to have received significant campaign contributions from attorneys and law firms across the United States. Records from the New Mexico Secretary of State show King and Balderas both received about 10% of their career gifts — from law firms or state attorneys — about $520,000 and $300,000 , respectively. Complete files are not available online for Patricia Madrid.

Since companies often make donations through their employees and families, it is difficult to track all contributions. The largest donation discovered by Searchlight New Mexico was more than $79,000 in career contributions from New York-based Labaton Sucharow to former Attorney General King, who later hired the company. Labaton Sucharow has also donated to Balderas’ campaign, and Balderas has used the company in several instances in recent years, according to a review of contracts from the attorney general’s office.

The same law firm is also a major contributor to Colón’s current campaign for AG. His opponents, however, were left behind.

Raúl Torrez, the other Democratic candidate, has not received significant corporate donations from out-of-state plaintiffs. He accepted at least $32,200, all from New Mexico-based litigation firms — none of which currently have contracts in the state.

Torrez did not promise to change the state’s litigation strategy, but his campaign manager said Torrez tries to avoid conflicts of interest when accepting donations and that if elected , he would focus on growing the GA office by handling fewer cases.

Meanwhile, Jeremy Gay, the Republican candidate for attorney general, is himself a plaintiff’s attorney. The only legal contribution he received for his campaign came from his own company.

Critics from all sides

This practice has drawn criticism from both conservatives and liberals.

The Manhattan Institute, along with other conservative civil law reform groups, generally views this practice as a threat to free market principles. The Liberals have different problems.

Daymon Ely, a Democratic state representative from Corrales and a malpractice attorney, said he was concerned about the number of cases going to powerful law firms in places like New York, Chicago and Denver. . Beyond conflict of interest issues, he said the heavy reliance on outside attorneys has eroded legal expertise within the AG’s office and that, unlike state attorneys, outside firms have an incentive to settle a case quickly in order to get paid, often to the detriment of New Mexico consumers.

To illustrate, he cited the recent settlement with Vivint Solar, a Utah-based company accused of fraud and racketeering.

In 2018, Balderas filed a lawsuit against Vivint, accusing the company of deceptive marketing that harmed thousands of New Mexican homeowners. Although the case ended in a $1.95 million settlement, no consumers in New Mexico received financial restitution.

And in the end, Balderas agreed to seal all case documents, preventing state attorneys from seeking restitution for dozens of Vivint clients.

Most of the money from that settlement went to the attorney general’s office for legal fees, while nearly 40% went to the outside law firm hired for the case. That company was Philadelphia-based Barrack, Rodos and Bacine, which donated $5,000 to Balderas’ campaign about six months before it was hired for the case.

“I firmly believe on principle that the AG office is the consumer’s advocate,” said Ely, who sought to draw attention to the practice. “If someone comes along and starts scamming thousands of New Mexico consumers — and that was the allegation in the case — they shouldn’t all have to go out and hire their own private attorneys.”

In recent years, other states have sought to reign in the powers of attorneys general, treasurers and comptrollers who can contract outside law firms in fee cap that these firms may receive for their work, outlining bidding processes for contractors, or creating processes for legislative oversight of attorney contracts.

Under Balderas, reliance on outside law firms went beyond consumer fraud cases. The AG’s office hired them for cases that would generally be considered essential functions of the office. The most important of these is Texas v. New Mexico, an interstate water dispute in the United States Supreme Court with up to $1 billion at stake for the state. For that case, Balderas hired Robles, Rael and Anaya, an Albuquerque firm that donated at least $36,000 to Balderas’ campaigns for state auditor and attorney general, according to precedent. projector survey.

Marcus Rael, the named partner, is not a water attorney, nor did he have any Supreme Court experience prior to this case. He is, however, a friend of both Balderas and Colón since their days at UNM law school. Rael and Balderas’ relationship sparked several ethics complaints last year, which were later dismissed. The group implicated in these complaints, New Energy Economy, filed a new complaint in early Aprilalleging that Balderas failed to provide public records of contracts with outside law firms.