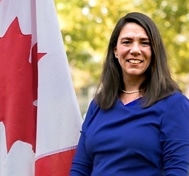 As Canada’s Consul General in New Mexico, I have witnessed the prosperity that comes from trade between the United States and Canada. For example, Canada is the primary export market for Hatch peppers. And look no further than the automotive industry. Thanks to years of specialization and integration, our two countries are now world leaders in the production of cars, trucks and other vehicles. And as we fight climate change together, the United States and Canada are better positioned than almost any other country to become the world leaders in the production of zero-emission vehicles.

Unfortunately, this future is likely to stall. As you may already know, a new electric vehicle (EV) tax credit is being proposed in the Build Back Better bill that is currently in the Senate. Canada supports the use of tax credits to usher in the adoption of electric vehicles to meet our common climate goals. But what you may not know is that parts of this tax credit put the U.S.-Canadian auto industry at risk and threaten to kill jobs in the U.S.

Today, Americans and Canadians seamlessly build cars together. Companies on both sides of the border regularly exchange parts five or six times before a final vehicle leaves the assembly line. And because this integration is so well balanced, cars made in Canada already have on average about 50% American content. Canadian cars are American cars. Overall, the $ 100 billion in auto trade that the United States and Canada generates each year helps maintain 1.1 million well-paying jobs, many of which are unionized.

Unfortunately, certain elements of the tax credit will upset the economy of our common industry. Since vehicles assembled in Canada will not be eligible for the tax credit, jobs in the United States that are supported by orders from Canada will be at risk. These orders will simply dry up as integrated supply chains are disrupted and uncertainty surrounding cross-border trade sets in. By changing the economy that has kept our auto industry globally competitive for decades, jobs will be at risk at a time when we cannot afford to lose our global competitive advantage in electric vehicles.

Much like the United States, Canada is dedicated to a future of zero emission vehicles here in North America. This is exactly why, earlier this year, our leaders agreed on a plan to make our two countries the world leaders in the production of batteries for electric vehicles. After all, Canada is the only country in North America with all of the essential minerals needed to make batteries for electric vehicles. It makes sense to continue to source metals and minerals like cobalt and nickel from Canada rather than from overseas countries.